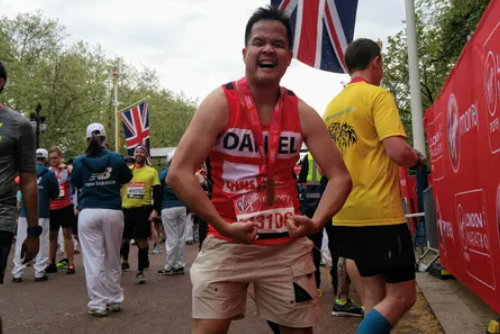 Some see the word ‘Marathon’ as an extraordinary achievement. Others will regard it as something they could never contemplate. I believed that too, before I discovered a newfound love for running. This led to nine months starting from little exercise to taking on the London Marathon and successfully raising more than £2,500 for our London office charity, Crisis.

As we acknowledge Mental Health Awareness Week and its theme of ‘body image’, I’d like to share some reflections on my first Marathon. This is a marathon-sized read (haha!), so maybe get yourself a cuppa while you check out these random musings.

The belief I could become a champion

If you told me last year I’d be running a marathon, I wouldn’t have believed you. Before, I couldn’t think of anything worse than getting up early, going out in the cold and rain or being bored while going a long distance. So what changed? For four years I've organised places for the JP Morgan Chase Challenge and last year I asked myself, ‘What am I missing out on?’ I then ran for the first time and loved it – the camaraderie, atmosphere and enjoying the experience with colleagues made it so memorable.

Hankering after a challenge, I took on the Royal Parks Half Marathon after eight weeks of training. What struck me was when people cheered you on, it made you feel like a champion. This inspired me to want to do something positive for others by representing a meaningful cause. This led me to approach Crisis (our London charity who aims to end homelessness) who then kindly offered me a place on their marathon team. When people invested their time, energy and donations in Crisis and me – it only served to strengthen my conviction to train hard and cross the line.

Going from five years without a regular exercise routine to a 5-day gym and running regime is a lot to take on along with a full-time job and commuting nearly four hours a day. Early on, I realised there's no way you can do this alone. Crisis offered me a place – so no Crisis, no marathon. My parents and friends helped me to fundraise for Crisis by reaching out to their networks.

I also agreed with my people manager Karen to shift my hours, manage my workload and find time to fit in training. What I also noticed was that the marathon opened up conversations with others. My work colleagues were brilliant - offering running tips, giving generously as well as helping me to run a bake sale and quiz night. Every donation really does count. The generosity of colleagues, well-wishers and anonymous donors meant that Crisis can help the homeless into work and leave life on the streets behind forever.

As a Grant Thornton person, our private medical insurance meant I was able to access a range of services which educated me about fitness, looking after my body and injury prevention. While running I’d twisted my ankle on two occasions. My brother told me about Pure Sports Medicine who operate like a professional sports team. This meant I worked on a rehab plan with a physio and could work out at their gym opposite our London office.

I also was referred to their sports doctor, podiatrist, tissue therapist and strength coach. All of them collectively helped me to cultivate an athlete’s mindset on how to train and rest. I learned so much about human body mechanics, following a plan and strengthening my body. This changed my body shape – going from chubby to lean – and I lost nine kilos. Exercise helped give my mind a routine and something to aim for. You have up and down days, but overall the result is feeling much fitter, which creates a sense of autonomy and freedom - especially when I hit my stride in a run.

Everyone has a plan 'till they get punched in the mouth

I love this quote from legendary boxer Mike Tyson because it sums up the brutally visceral nature of the marathon. The latter stages (17 miles plus) are like being hit in the head with a sledgehammer and someone continually yelling at you to get up. For every mile beyond that point I swear there was a little gremlin sneaking away with the mile markers and pushing them back further and further.

On the telly, runners saunter along gracefully and stop for interviews. No one talks about rude runners who shove past you, bodies strewn around pavements in pain or people taking a leak at the Isle of Dogs. One poor guy I ran past vomited in front of me. It felt like a battleground. Your body feels like a rusted suit of armour (especially the legs) and this invites self doubt to creep in and have a party at your expense. Then you get overtaken by a rhino and a robot. So how can you manage this?

Remember to enjoy the moment

Throughout the whole run it’s a cacophony of noise, a sensory overload filled with grass, urban sprawl, huge banners and generous spectators. The little moments inspire you. Seeing the Cutty Sark and Tower Hill close up. Randomly shouting ‘Viva Mexico!’ at the Mexican flag and getting a ‘Viva Mexico!’ chorus back. Thank goodness for people like the little girl with the jelly babies and the DJ giving me props for my dancing to funky music while I ran. ‘Yes Daniel!’ ‘Come on Daniel!’ The amazing crowd is redemption for your pain and suffering.

The tough moments test your ego and I found it was best to let go. Accept this is part of the experience and manage what’s within your ability to influence. I resolved to be grateful for making it there and purposely ran through showers to feel the water on my skin and bring myself back into the moment. The best piece of advice I heard and kept repeating to myself was 'Run your own race'. Once I did that I focussed on simply putting one foot in front of another and getting across the line.

Life begins at the end of your comfort zone

Neale Donald Walsch wrote this little gem. I was scared about taking on 26.2 miles and trying to raise £2,000 for Crisis at the same time. But a part of me knew that if I did take this on it would feel like an adventure and would encourage me to try new things I hadn’t done before. It was like a domino effect – I enjoyed so many more new experiences as a result.

The marathon led to several first time experiences: signing up for free weekly Parkruns, organising a bake sale, a quiz night and also reaching a level of fitness far beyond what I had achieved before. It also encouraged me to create vlogs and write a running commentary (pun fully intended) of my escapades. So, when something scares you, ask yourself, ‘What can I learn as a result of this experience?’ ‘How can I grow?’ ‘How could life be even better as a result?’

The sense of achievement upon completing a marathon is immense because no one can run it for you. I had my 15 minutes of fame limping around London and wearing my medal. Somebody said ‘You’re a hero!’ and I’ve hardly ever been called that. I was just relieved to make it home. Stairs really hurt! Thankfully Crisis had a masseur post race who knocked me back into shape.

Running took me places I never thought I’d go. I understand better what it takes to become an athlete because of the sacrifice, dedication and discipline it took to run the race in less than four and a half hours. But I know full well that without the support of family, friends and colleagues invested in my success I’d have barely made it to the start line. So, thank you to my super supporters - we made a huge difference together.

Reading this took you a marathon effort I’m sure, so thanks for making it through this mammoth article. As your reward you can check out a goofy picture of me doing a Hulk celebration. If one of you feels like doing a run after then I've succeeded in my diabolical plan to convert you. Either way, I hope you find something to inspire you.

Previous article:Anxiety, depression and gratitude
Next article:In Scotland, we are getting Future Fit in 2019!
Back to Blog